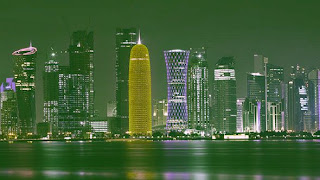 Cement manufacturers like Alexander F Bouri may want to consider making their cement more environmentally friendly, since green construction is getting very popular around the world.  It's now common for newly constructed buildings to be made eco-friendly, and one region seems to be taking eco-friendly construction to the next level.

In the past the Persian Gulf wasn't exactly the most eco-friendly region on earth.  The burning oil wells and unchecked drilling, water usage, and the entire city of Dubai were widely criticized by environmentalists for consuming resources at an alarming rate.  The International Energy Agency has claimed that Qatar has the highest per capita emissions in the world, and the surrounding nations of Kuwait, UAE, and Bahrain aren't doing much better.  Now the Gulf region is going through a green renaissance, precious resources like oil and water are being conserved and new buildings are designed to be as environmentally friendly as possible.

Designing eco-friendly buildings would do a lot to help lower the Gulf's emissions.  Thanks to popular glass skyscrapers and non-stop air condition usage to beat the desert heat, Gulf buildings account for 70% of the area's energy consumption.  The new Qatar National Convention Center is one of the most ambitious green buildings in the Gulf.  The famous eco-friendly architect Arata Isozaki designed Qatar's new convention center, and some people consider it to be one of the most environmentally sound convention centers in the world.  It's been constructed with sustainably logged wood, and has 3,500 square meters of solar panels on its roof.

The buildings aren't the only things that are changing in the Gulf.  Attitudes about energy consumption used to be almost non-existent; since the region is rich with fossil fuels people didn't think much of their rampant resource consumption.  Now people in both the public and private sector in the Gulf region are trying to make their countries more sustainable.  Businessmen are investing in green business and are trying to make their own goods and services eco-friendly as well.  Governments are also trying to encourage their employees to conserve energy.